This report describes the development of a game called StarBall as part of the “Developing a MarbleRace Game” practical project. Our game implements several techniques in order to achieve high graphical quality coupled with simple but challenging gameplay, while keeping the underlying design minimalistic. These techniques will be presented as part of this report. 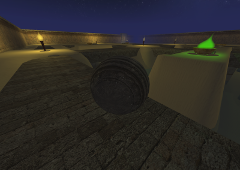 Marble Racing games are a sub-genre of games where the player controls a marble to either run races, solve puzzles or complete similar tasks. In Saxum the player must travel through an open level completing some basic switch tasks and a simple puzzle to help the sun rise again.

The source code is available in https://github.com/Faerbit/Saxum

As part of the practical course ’Developing a Marble Race Game’ we developed a marble race game where you have to reach the goal in a futuristic, maze-like environment - in the fastest time possible. One of our main reference points was the movie ’Tron’, which is characterized by a futuristic style - involving dark environments lit up by bright lights. 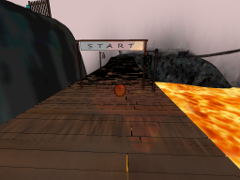 In the practical course Developing a Marble Race Game the task was to create a racing game, using a marble as racing object and concentrate on the graphic output and the game logic (i.e. the code structure, defining how the game runs). While developing our game Globus Ex we employed various important parts of a game engine and shader based graphic effects. In this report, we will cover some of the implemented techniques superficially and state problems, which occurred while developing the game.