This is the project page of the Constrained Mixed-Integer Solver (short CoMISo) developed at the Computer Graphics Group of the RWTH Aachen University, which emerged from our Mixed-Integer Quadrangulation project.

This software provides a convenient tool for setting up and solving linear systems stemming from quadratic energies subject to linear equality constraints as well as to integer constraints. Basically only the system matrix, the constraints and the variables to be rounded are provided to the solver which returns a properly indexed solution vector. This drastically minimizes the programmer's effort as a proper elimination of the constraints and the necessary reindexing is taken care of internally. The difference to popular constraining techniques such as Lagrangian Multipliers, which require no reindexning (but unfortunately result in larger, non-positive semidefinite systems), is that CoMISo efficiently eliminates the constraints from the system matrix, yielding a smaller system while at the same time preserving positive semidefiniteness.

The solver together with example code to get you started can be found below.

If you decide to use the CoMISo solver in your research, please cite the accompanying publication Practical Mixed-Integer Optimization for Geometry Processing.

The CoMISo solver library is released under the GPL license, for commercial use contact Henrik Zimmer or David Bommes.

19-07-2013 : Due to popular demand, we now supply Build Instructions for Windows

The Constrained Mixed-Integer Solver as well as the exemplary OpenFlipper Plugin are available via GIT server:

Building and using the CoMISo package is made simple by using the automated build system cmake. However, additional to a reasonable C++ development environment the following packages are required:

Note: your operating system might already provide easy-to-use-and-install, pre-built packages. For example Ubuntu based platforms can use

to get the necessary packages.

on a Windows System

On Windows or Macintosh systems the corresponding packages usually need to be manually downloaded and installed.

Extract (check out) the package into a directory of your choice (DIR). For integration with OpenFlipper, it is advantageous to unpack into the OpenFlipper library directory (e.g. /home/user/OpenFlipper/libs/) this way the solver is build automatically when building OpenFlipper

The CoMISo library can be built to be integrated with the OpenFlipper framework or as a stand-alone package.

Having extracted the packages into the your directory of choice (DIR), perform

and the examples can be found under

NOTE!: on some systems the SPQR library from SuiteSparse is not available as shared library libspqr.so by default and will cause linking problems. If you do not need it, it can be disabled by the flag SUITESPARSE_SPQR_VALID in the cmake interface.

Having extracted the packages into the OpenFlipper libs directory (/home/user/OpenFlipper/libs/), the package will automatically be build together with OpenFlipper:

To get acquainted with the functionality of the solver, the example programs (/DIR/CoMISo/Examples/) are a good start.

Here one supplies a, usually overdetermined, m x (n+1) row-matrix (B|b_) with the rows being the m linear equations of the system, b0x0+...+bnxn=bn+1. The constraints are eliminated directly from the B_ matrix before BTB is formed.

Here one supplies the n x n system matrix A=BTB and the right hand-side a=BTb. I.e. the partial derivatives of the quadratic energy. Here the constraints are eliminated directly from the A matrix.

Basically the difference consists in whether BTB and the right hand-side are formed by the user or by the solver, and at what stage the constraints are eliminated.

Both solver approaches and other functions of the library are demonstrated in the examples. 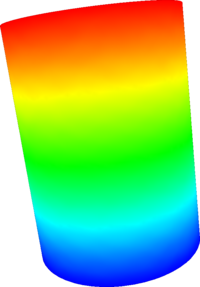 The provided examples (above) already demonstrate the basic functionality of the solver and how to write applications using it.

To give an example for the integration of the CoMISo library into external software projects, an OpenFlipper-Plugin: HarmonicExample-Plugin, is provided, showing

Provided that the CoMISo has been installed and integrated into OpenFlipper as explained above, this step is now very easy.