In this practical course, you will implement a Jump'n'Run Puzzle game based on the concept of Continuity, which combines the ideas of a conventional sliding tile puzzle with a Jump'n'Run style game. We extend this concept by embedding several Continuity levels on a simple base geometry which are connected along common edges (cf. Cogs). The game will be rendered in 3D and the player controls the game in 2D, which follows the concept of Jump'n'Run, but gives much better visual effects (cf. Lemmings Revolution or Rebirth). 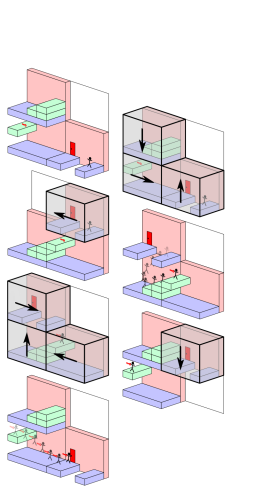 Upon to your choice, the game could be a single/multiplayer game for PC/iOS platform. Participants will work in 2 teams, each has 6-7 members. Within each team, there will be subteams concentrating on the game engine or the content creation. Although the students can focus on a smaller problem, they have to ensure that their parts fit into the whole framework of the game. Therefore, the intercommunication between the groups is of a very high priority in order to define precise interfaces and common data structures.

For a high visual quality of the game, students will have to implement several shaders in a deferred rendering pipeline that is based on OpenGL. This includes effects like particle systems, complex materials (e.g. relief mapping) and post processing effects (e.g. glow, deferred lighting, motion blur, depth of field). To interact with the game world, students will need to do the physics simulation, like gravity. The player itself will also be part of the physics simulation where its movement is restricted by the static world geometry. Students should also handle the event trigger, like picking a key to the exit.

Students will have to implement a small level editor (based on the Qt framework) that allows for the creation of the game world. Since this kind of modeling should be done on a very high abstraction level, single instances of geometry will have to be created with common tools like blender or 3dsmax. Furthermore, the group has to create the textures for the geometry, which can be done with tools like gimp or photoshop.